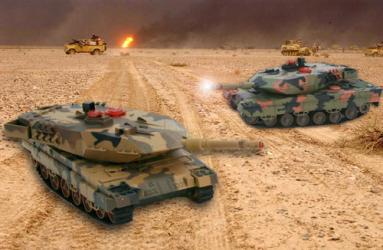 Get ready to take charge of your own German Tiger Tank. This IR remote controlled tank has independent flexible tracks, realistic sound effects, and firing simulation. Each remote and tank can be switched between 4 different channels so up to 4 people can have a Real Infrared Battle*. Set up your own war scenario with the included WWII props and get ready for battle! Real Infrared Battle: During battle when a tank gets hit it will sway and blink in place. After a tank is hit five times it will be taken captive and then be controlled by the winner.

The RC Leopard Tank Battle Pack includes 2 Leopard Tanks on different frequencies so you can begin the battle begins as soon as you unpack them! Tanks come in 2 distinct color schemes, one is desert camo style, the other traditional woodland camo. The individual tanks are equipped with an infrared battle system and realistic sounds; hit the start button on the remote and watch the tank shake as you hear the massive diesels rumble. Traverse the turret left and right to take aim at your opponents; when you score a hit, one of the indicator lights on the top of their tank will turn off.

NOTE: Several Infrared RC Tanks are presented at our recommended online stores. Read details carefully to make sure the tanks support infrared battle system. Don't forget, to simulate tank combat, you need at least 2 tanks!! Some infrared tanks support up to 4 frequencies (some only 2), so you can play up to 4 players.
Picture 1 - Picture 2

This product is available at:
Some stores give search result, it may not appear if Out of Stock